A Rage for Revenge 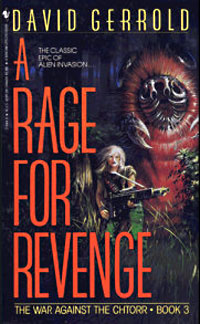 In A Rage For Revenge, his third War Against the Chtorr book, David Gerrold increases the amount of homosexual material markedly, and pumps up the pop psychology and pop philosophy content radically. Page after page is devoted to characters speechifying on how to expand your consciousness and get in touch with your feelings, and then we have page after page of the characters weeping with joy or sadness and screaming in rage or ecstasy. There is some adventure content, with the narrator battling aliens, traitors, and malfunctioning robots with grenade launchers, flamethrowers, and military vehicles, but mostly the narrator is in consciousness-raising seminars or among religious cults or in some kind of commune, listening to lectures or sermons. In what some will see as a piece of self-indulgence each of the book's seventy chapters starts with an aphorism from fictional philosopher Solomon Short, and ends with a limerick. The aphorisms are often puns ("If this be reason, make the most of it,") or Oscar Wilde-style paradoxical word play ("I've known for years that I have no humility. It's a virtue, to be sure, but I can live with it.") or banal criticisms of religion or traditional mores ("There is no such thing as a holy war.") The limericks are generally puns about genitalia and sex acts.